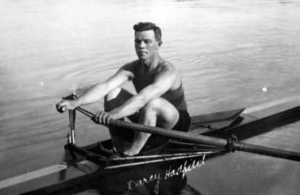 Darcy Clarence Hadfield was born at Awaroa Inlet, Tasman Bay, New Zealand, on 1 December 1889. He was the son of William Welby Hadfield, a farmer, and his wife, Martha Adele Ann Snow. After leaving Awaroa School at the age of 13, Hadfield worked on the family farm and learned the rudiments of carpentry and boat building from his father, who was skilled in both crafts. In 1910 he moved to Auckland where he was employed at Charles Bailey’s boat yard as a shipwright. He later worked at the same trade for the Union Steam Ship Company of New Zealand.

From early childhood Hadfield had relied on rowing­boats as a means of transport and was easily persuaded by his employers at Bailey’s boat yard to join the Waitemata Boating Club. It was soon obvious that he was a potential champion. In his first regatta, at Mercer during the 1910–11 season, he was in the winning crew in the maiden fours event. This success was repeated at a regatta in Rotorua. In the 1911–12 season Hadfield and D. Pugh won the maiden double sculls at Mercer and the same event and the junior double sculls at Ngaruawahia.

However, it was as a single sculler that Hadfield was to achieve fame. His success in handicap events encouraged him to compete in championships, and in 1913 he won his first New Zealand title, the 1912–13 single sculls. Throughout the following season he was in outstanding form. In spite of the starts he had to concede in handicap events, he won all the races he entered as well as outclassing his opponents in championship events. He retained his New Zealand title in the single sculls for 1913–14 and 1914–15 before the championships went into recess for four years because of the First World War.

On 29 August 1916 at Auckland, Hadfield married Sereta (Sarita) May Coyle, a saleswoman. Soon after his marriage he embarked on active service with the 1st Battalion, Auckland Infantry Regiment. In 1917 he was wounded at Passchendaele (Passendale) and invalided to England. He recovered and returned to the trenches, but suffered a bronchitis attack and was recuperating in England when the war ended. He was still there when various sporting events were organised to entertain the troops awaiting repatriation after the war. When the NZEF Rowing Club was formed Hadfield became one of its most prominent members. He rowed in several winning fours and eights and proved invincible as a single sculler. He was one of 19 entrants for the singles at the Royal Henley Peace Regatta in July 1919. He won the event with ease and in the process defeated the 1912 Olympic champion, William Kinnear.

In the same month, at the Inter­Allied Games in Paris, Hadfield easily disposed of the opposition. Marshal Pétain, the French commander in chief, presented gold stop­watches to the two men he considered to be the outstanding competitors at the games and both went to New Zealanders. Hadfield received one, the other going to Dan Mason, a middle­distance runner from Kamo. When the New Zealand rowing championships were resumed in 1920, Hadfield won the single sculls and the doubles with A. White. It came as no surprise when he was chosen to represent New Zealand in the single sculls at the 1920 Olympic Games at Antwerp.

With little opportunity for training during the voyage to Belgium for the Olympics, Hadfield was at a disadvantage compared with the European and American oarsmen. He finished in third place in the final behind John Kelly of the United States and Jack Beresford of Great Britain to become the first New Zealander to win an Olympic rowing medal. His first child, a daughter, was born before he returned from the games. He and Sereta subsequently had two sons.

In 1922 Hadfield turned professional and challenged the Christchurch sculler, Dick Arnst, for the latter’s world championship. Each rower put up £200. The race was held on the Whanganui River on 5 January and Hadfield won by 10 lengths. Three months later, again on the Whanganui, he lost his title to the Australian Jim Paddon. After an unsuccessful attempt to regain the championship in Australia in 1923 he retired from serious competition.

Hadfield was a quiet, modest man of medium height. He was regarded as a gallant sportsman: gracious in victory and in defeat. After his retirement he gave outstanding service to rowing as a coach, administrator and boat repairer. In 1956, at the age of 67, he rowed number three in a winning veterans’ four at Ngaruawahia. His sons were also prominent members of the Waitemata Boating Club.

Darcy Hadfield died in Auckland on 15 September 1964, survived by his wife and two sons. His ashes were scattered on the water at Okahu Bay in the Waitemata Harbour.