How Waitemata Rowing Club was Formed

Prior to the formation of the New Zealand Amateur Rowing Association, and the institution of local associations with full powers in the control of rowing events at regattas, there was, in addition to one or two freelance crews, a body voluntarily constituted by the Auckland, (formed before the present club) North Shore and Ponsonby Rowing Clubs, and known as the Auckland Rowing Association, and later as the Northern Rowing Union, but having no power over regatta committees, who framed their own rules.

As one rule read – “Three starters or no race,” it not infrequently happened that those crews who deemed their chance of winning too uncertain would not
go to the post, and therefore no race. Feelings of bitterness and rancor arose in consequence.

On one Regatta Day, after the race had been abandoned, a meeting of rowing men took place in the grounds of the old Graving Dock. Feeling was running pretty high when the late Mr. W. G. Smith, our Grand Old Man, and for many years Vice­ Commodore of the Club, in a characteristic manner (he was always a straight hitter) exclaimed “You’re a jolly lot of cocktails. I’ll find a crew that will not be afraid to take a licking.” 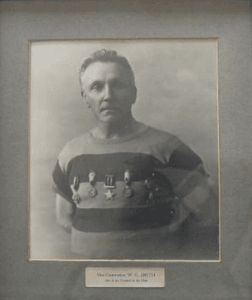 “W.G,” ever a determined fighter, lost no time in making good his word. A meeting was convened, the response being altogether encouraging, and the Waitemata Boating Club was launched upon a career that has been a strenuous one, but withal, one to be proud and jealous of.

In the “New Zealand Herald” of October 17th 1883, there appeared the following paragraph. “the owners of the Whaleboat built by Baileys are thinking of forming a new Rowing Club. A week later this advertisement was inserted once again into the New Zealand Herald.

Formation of New Rowing Club
“A meeting of those interested in the above will be held in the Waitemata Hotel this (Wednesday) evening the 24th October at 8 o’clock
(Sgnd.) W. G. Smith,
Sec.pro tem.”

The meeting was duly reported thus:­

“A largely attended meeting was held last evening at the Waitemata Hotel to consider the advisability of forming a new rowing club. Mr. G. Gapes was elected to chair and briefly referred to the object for which the meeting had been called. After some discussion it was resolved that a Club be formed, to be called the “Waitemata Boating Club,’ and that it shall consist of an unlimited number of members. The annual subscription was fixed at 20/­with no entrance fee. A sub­committee consisting of Messrs Smith, Moore, McKay, Brannigan and Clark were appointed to draw up rules and by­laws, and report to a meeting to be held on the following Wednesday evening, when the election of officers will also take place.”

Another meeting was held on October 31st 1883, the Press report reading:­

“A largely attended and enthusiastic meeting took place at the Club Room, Waitemata Hotel. Mr. McDonald occupied the chair. The secretary read the report of the sub­committee together with the rules and bylaws which had been prepared. These after some minor alterations were adopted. A letter was read from the Hon.Sec of the A.R.A stating that the new club would be admitted to membership.”

“The following gentlemen were then elected to fill the various officers of the club”:­

“It was resolved to enter the Club’s whaleboat, the “Young Colonial,” for the Whau Regatta to be held on the 9th November 1883.

It was no mean achievement to launch successfully anything new in any department of activities in those days (the depression of the early 1880’s) as so many of the best of the younger generation had migrated to Australia which was then experiencing a boom. But “W.G” assisted by a few enthusiasts threw himself heart and soul into the new venture with the result that, by the time the following season opened, the Club was strong enough to enter upon a career that put it at once in the forefront, and made its name one to conjure with throughout New Zealand.

W.G Smith ever maintained his interest in the Blue and Gold’s. No appeal for advice and assistance ever met with a refusal, often both were given unsought. The loss of his genial and cheering personality was keenly felt by all those who had the privilege of associating with him. His memory is kept green within the club with the W.G.Smith Shield, donated by him whilst still among us on February 21st 1914 to commemorate the opening of the, then new, boat shed in Mechanics Bay.